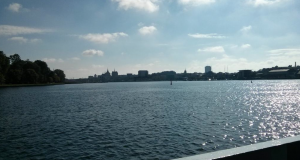 What are the benefits to the community?
The South Harbour is a working harbour owned by Small Craft Harbours and operated by the City of Powell River, primarily to provide moorage and shelter for commercial fishing vessels and transient recreational boaters.

A report by the Powell River Regional Economic Development Society (PRREDS) found that many boats bypass Powell River because the aging structures are too small and narrow to accommodate them. The City of Powell River, PRREDS and Community Futures Powell River propose to increase moorage space from approximately 800 meters (2625 feet) to approximately 1270 meters (4155 feet) enabling the South Harbour to accommodate and attract the growing market need for the wider range of boat size.
It is important to note that the South Harbour expansion is intrinsically linked to the revitalization of the Wharf at Westview since the harbour is accessed via gangway from the wharf.
The South Harbour expansion portion of thewaterfront development project will attract sig-nificantly greater numbers of commercial and transient recreational vessels to the area by:

How much will the project cost and how is it being funded?
The total cost is budgeted at $6.04 million